In about a half-hour, we’re going to pack the van and head south to Santo Domingo for our last night in the D.R. We’re all looking forward to some beach time, as well as the opportunity to talk beneath the stars about what we’ve witnessed over the past week.

Below is a photo from yesterday afternoon’s visit to the women’s group. I’ll write about that visit when I find the time, perhaps in the Miami airport. There is still a lot to share, even though our trip is winding down.

Thanks to all for reading…

That's me (Ryan) on the right.

We’ve spent a lot of time in cars and minivans this trip. Because Tom and I were lodged outside Cotui in the town of Maguaca, with Don Gambo and Doña Fina, we had to be driven the 15 minutes in to Cotui every morning, and back to Maguaca every evening. Our chauffeur was often Aristides, the husband of Rita’s childhood friend, Chi-Chi, and the brother of Fina. Aristides is tall, has a regal bearing, and looks like the former Celtic center Robert Parish. He’s somewhat intimidating, but I’ve discovered that he has a sly sense of humor, and I felt privileged when he slapped my leg in jest at something I said during one of our drives.

I had hoped that Maguaca, located outside of the incredible noise and hustle of Cotui, would be a pastoral place. But it’s really a busy crossroads with a colmado, the Dominican term for a corner store, which often doubles as a gathering place in towns with no other stores.

The colmado was next door to Gambo and Fina’s house. It pumped bachata and reggaeton music until midnight, making Maguaca perhaps the loudest place I’ve ever tried to sleep, including the South Bronx.

Others in our group, lodged in Cotui, also struggled with the noise: dogs barking, roosters crowing, the constant wasp buzz of motorbikes, bleating horns, blaring music. Ellen, the Peace Corps volunteer who had joined us for several days as a translator, told us that the Dominican Republic was ranked as the second-loudest Peace Corps locale in the world.

To which everyone in our group asked: which country could possibly be louder?

END_OF_DOCUMENT_TOKEN_TO_BE_REPLACED

I often meet with doctors and nurses in my job at DHMC, but I rarely get to see them in action. One of the pleasures of this trip has been watching them access their vast store of knowledge, witnessing their eagerness to help wherever possible, and enjoying their excitement over unusual cases. Typical post-clinic conversation: “Did you hear that whopping heart murmur?” Nods and grins all around.

At our morning huddle on Saturday, some of the clinical folks expressed that they feel like they’re “not doing a lot medically.” They have few, if any, of the diagnostic and treatment capabilities available to them at DHMC, and so are very limited by the care they can provide.

After talking things through, we were reminded of several things: that the clinicians did send two people to the hospital from our clinic at Arroyo Vuelta on Friday. One with upper GI bleeding, and the other with a high blood glucose reading (note: I’m already picking up the lingo). That proper hand-washing and clean water supplies would make a bigger difference than massive deliveries of medicine or superman-style interventions. And also that we need to make peace with our limitations.

END_OF_DOCUMENT_TOKEN_TO_BE_REPLACED

Here are some photos we took during our clinic visits on Thursday and Friday, to Las Guyamas and Arroyo Vuelta. 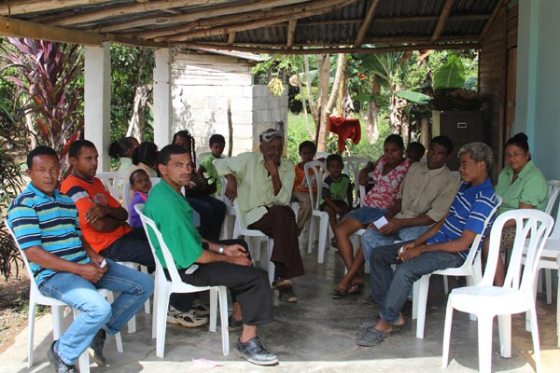 END_OF_DOCUMENT_TOKEN_TO_BE_REPLACED

There’s a word that describes a Latin American culture of subsistence and small-crop farming: campesino. It literally means, “without land,” and it refers to the neediest communities, the people most on the margins.

On Thursday we traveled deep into campesino territory, to a small village called Las Guyamas. The terrain reminded me of El Salvador: lush green hills grazed to the edge of erosion, bantam chickens strutting and scratching beneath banana trees, houses with tin roofs and slabwood walls standing forlorn in dirt yards worn shiny by bare feet. Literally the end of the road.

It’s easy to consider a community like Las Guyamas as a forgotten place. A community left out of not just the global economy, but largely out of the Dominican economy as well. These are people with few options, and little, if any health care.

As we ascended toward the church where we would hold our screening clinic, we stopped at the houses along the way to spread the news that a team of doctors and nurses were here to provide medical care. Freed of set-up duty, Tom and I shouldered our cameras and walked back downhill, hoping for shots of the people walking to the clinic.

END_OF_DOCUMENT_TOKEN_TO_BE_REPLACED

Both the internet and electricity have been unreliable, so I’ll take a moment when both are working to post some photos from our clinic at El Limon (a small settlement at the top of a mountain outside Cotui) yesterday.

We were supposed to be at the clinic for two hours; we were there for four. The doctors (Justin, Jennifer) and nurses (Rita, Chris, Kathy, Raeann) saw over 30 patients. We gave away many dental care kits and bags of vitamins, made some new friends, and saw two legitimate emergencies: a young man who had fallen off a motorcycle and had seriously abraded his leg (he needed further treatment in Cotui), and another young man who had an allergic reaction to a bee sting.

The clinical folks were energized by the opportunity to work. Lots of excited chatter in the minivan on the way back to Cotui. As we jounced along over speed bumps and stones in the moonlight, I thought that such a road may be more intimidating for a group from, say, New Jersey. But the road wasn’t much rougher from some of the roads we drive on in the Upper Valley.

I’ll try to write more when we get the time, and the next time the power is up. Today will be busy, with at least one clinic, and maybe two. It’s fun to hear the clinicians discuss their game plans. We’re really working now.

END_OF_DOCUMENT_TOKEN_TO_BE_REPLACED

We began the day at the hotel in Boca Chica, with breakfast as a group on the patio. Eggs and ham and cafe´ con leche, which Chris had noted that one makes by pouring a cup 1/8 full of dark, strong coffee, and then filling the rest of the cup with warm milk. As if the sunshine and the camaraderie and the promise of the day ahead weren’t enough to get you going.

Loaded the suitcases into the makeshift trailer one last time, and then drove on crowded roads to the capital (which everyone seems to call “the capital,” instead of Santo Domingo). Paulino, our driver, took us on a short driving tour through the gorgeous colonial part of the city, which reminded me of Oaxaca, Mexico, down to the tiled street signs bolted to the walls.

Rita’s mother had met us at the house in Boca Chica, and she had said she doesn’t like the capital very much (she’s from La Romana, about an hour east of Boca Chica), largely because of the traffic.

END_OF_DOCUMENT_TOKEN_TO_BE_REPLACED

Raeann looking out over the greening valley a few miles outside Cotui, our final destination. Lots of driving today, from Boca Chica through Santo Domingo to Cotui. Many good photos and lots to tell about a visit with a women’s group this afternoon. Will write again Wednesday morning, although the internet has been unpredictable. I’ll take the chance now to make this quick post.

Rita was thrilled that we sailed through customs, even though I was momentarily taken aback when the man asked me – the first in our line – if I was bringing in medicine. Trying to remember the contents of the two gigantic bags on the metal cart in front of me, I hedged. Not medicine, exactly, but medical supplies.

Raising an eyebrow at my hedge, he still let me enter the country.

Through the glass doors, into the smells of the Caribbean: frying oil, warm earth, rotting fruit, diesel exhaust, cologne, something burning. Felt amazing to finally be here. Smiles all around.

END_OF_DOCUMENT_TOKEN_TO_BE_REPLACED

Twelve heavy bags among seven people. Lots of weighing and repacking to fit under the 50 lb. limit. None of us got much sleep last night; too excited for the coming day.

Our shuttle bus driver was from Puerta Plata, on the northern coast of the DR. He was impressed by the purpose of our trip, as well as by the volume of our luggage.

He said it should be in the high 80s today in Santo Domingo. (I promise to limit the weather references as much as possible.)